Opinion: Canadian publishers to receive $595-million in federal funding in an elections year 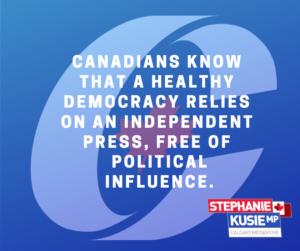 A healthy democracy relies on an independent press, free of political influence. It should never be up to any government to determine which media outlets receive government support and which media outlets do not. By nature of their appointment alone, it is unlikely these panelists will be truly independent. After the implementation of this hand-picked panel, how will journalists who have an opinion contrary to that of Justin Trudeau’s government possibly compete for these subsidies?  Government funding for journalism of this magnitude and a Liberal government appointed panel will discredit talented, Canadian journalists and their publications.

The media plays a vital role in our democracy. Voters rely on it to provide non-biased, factual information that ultimately aids them in making the very important decision about who the leader of this country should be. Making this decision is yet another affront to our democratic system. We know the Prime Minister is worried about keeping his job but, sacrificing Canadians’ right to a free and independent press to do so is unprecedented.

Justin Trudeau’s Liberals however, are not new to weakening democracy. They have already set limits on opposition parties prior to an election, unilaterally imposed new rules around televised leaders’ debate, and are allowing liberal friendly foreign interests to interfere in our elections with loopholes in Bill C-76. This media buyout is just another example of how the Liberal Government is trying to manipulate the 2019 election in their favour. The tax dollars of hard working Canadians should not be going towards advancing the Liberal party.

Nevertheless, in the end, nobody wins. Not Canadians, not journalists, and definitely not Justin Trudeau. He has strongly underestimated Canadians and their ability to realize that they are being lied to.