During this pandemic, people who suffer from Cystic Fibrosis are living in constant fear that they will contract COVID-19 which would, in many cases, would take their lives. 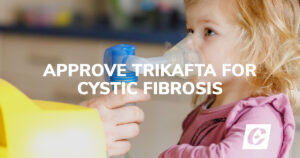 In Canada, 4,300 people suffer from Cystic Fibrosis (CF); most of them being children and young adults. Effective treatments for CF are available worldwide, but many are not currently available in Canada. Trikafta is a medication found to effectively treat 90% of cases.

Vertex, the producer of Trikafta and other CF drugs has indicated their willingness to negotiate and conclude a Price Listing Agreement with the Pan Canadian Pharmaceutical Alliance (pCPA). During the negotiation period, they have offered to supply their drugs to Canadians suffering with CF for free.

Conservative MP’s are now looking to the federal and provincial governments to approve this drug for distribution in Canada and to conclude a pricing agreement. Stephanie and her colleagues look forward to a response from Minister Hajdu on approving this critical drug.